Over the weekend I’m out with my friends, Sunny and Angel.

If you know anything about the 3 of us together, you should bear in mind that with the 3 of us ANYTHING can happen.

Sunny and Angel really like this guy for me?

Guy isn’t cute enough for Sunny and she, as usual, doesn’t have the heart to walk away from him?

There have been plenty of times when I’ve REALLY liked a guy…only to look back at these 2 shaking their heads and rolling their eyes hard enough to make me say, “Sorry gotta go NICE TO MEETCHA!”

On the OTHER hand, me and my girls have banned together at times to get our girl home with some dude we just met but REALLY REALLY like for her!

Regardless of the case, here are the 6 reasons you absolutely MUST befriend her friends if you wanna have her to yourself.

1. They’re Out For Themselves…Not YOU

Sunny, Angel, and I are at the bar inside Honeycut in Downtown Los Angeles.

We down our shots of Fireball when Sunny grabs the guy nearest to her and starts grinding on him.

Angel and I look at each other and roll our eyes: Here she goes again!

They don’t even get through the entire chorus for “This Is How We Do It” before Sunny instantly backs away from him and comes to hide behind me.

The 3 of us laugh and run off into the crowd as far away from the poor guy who’s now confused and chasing after us.

Was Sunny into him?

That’s just us amusing ourselves together BECAUSE WE CAN and that’s what we’re there for: For the fun, the laughs, and the CRAZY STORIES that we’re creating TOGETHER.

When girls go out together, they don’t necessarily say to themselves, “I can’t wait to meet a bunch of guys tonight!”

Granted we’re quite sure that’s the BI-PRODUCT of our night…however we’re in it to have the experience of it all TOGETHER.

And unless you become a STANDOUT EXPERIENCE to their antics…

You’ll fall to the wayside like every other dog coming in to do tricks for treats.

2. They’ll Be Your Cheerleaders

We find our way to the dance floor when I lock eyes with a seemingly studly Asian boy.

He looks like he could easily be a K-pop star.

(or at least be FEATURED in one of those weird videos they play in the background while I karaoke.)

He immediately splits right through Angel and Sunny to put his hands on my back and sway me against him, never taking his eyes off me.

I immediately give him my backside so I can discuss protocol with the girls.

They look at me and excitedly nod and scream, “He’s hot!”

Sunny’s excitement doesn’t break, “But he’s so hot!” as she throws a thumbs up my way.

I shrug and go with it.

If her friends like you enough, they’ll vouch for you all the way even if she won’t.

Remember, they’re in it for the experiences together…

And if they see that you’d be a HELL of an experience for their friend, then EVERYBODY wins!

3. If They’re Not Interested In You, She Won’t Be Either

Now, “hot” only got K-Pop so far, because now he’s just moving himself behind me while the 3 of us dance together.

For all his, “Where are you from?!” and “What do you do?!” questions that he attempts to SCREAM as loud as he can into my ear…

He’s taking away from the actual fun I’m having with my friends.

And nothing annoys me more than having to have polite small talk with a guy that we as a group are not collectively interested in.

(There I go again ending a sentence with a preposition FUCK!)

This is in line with the fact that if they DO like you, they’ll be your biggest cheerleaders.

Well now you’re just becoming a burden on their fun.

Now we’re knee-deep in the crowd when Sunny jerks her head back and does a double take.

Angel and I roll our eyes and storm after her (this is a common occurrence to our nights).

We eventually find her standing about 2 feet from a tall couple grinding on each other to 50 Cent’s “In Da Club,” when we notice it’s her ex boyfriend.

Excuse me, her PSYCHO ex boyfriend who she’d been broken up with for over 2 years now and was just texting her earlier today about how badly he still believes in them getting married.

And here he is rubbing his dick on this poor girl’s ass.

Our jaws drop with Sunny’s as Angel grabs her hand and we try to race off before he sees us.

He comes over and Angel immediately puts her back to him, acting all Big Black Body Guard to us as Andrew The Asshole discards his dancing partner to try to talk to Sunny.

They exchange hello’s, Angel and I ignore him, then we each grab Sunny by the wrists and drag her to the next room…

DETERMINED to shield her from his wanting shaft for the rest of the night.

Nothing on this PLANET is more vulnerable than a polite drunk girl standing by herself, which is why we ALWAYS go everywhere in huge groups.

(Yes, this is EXACTLY why we all go to the bathroom together).

If her friends see you as a threat, they’ll be quick to karate chop your cock if it comes anywhere NEAR her.

So be sure to put out the fires FAST and get on the girls’ good graces.

We eventually realize that we don’t wanna run around hiding from Andrew The Asshole all night, so we decide to skip and go to another bar.

Lo and behold, I run into my own friends at The Edison.

We somehow make it down those TREACHEROUS stairs when I see the 6 boys at the bar talking to a bunch of girls.

“BOYYYYYSSS!!!!!” I scream as I throw my arms around each one of them.

“These are my friends Angel and Sunny!” I scream as I introduce everybody to everybody.

And these girls are drunk and frisky.

I can’t say enough about these boys…I truly love them all and WITH THAT I cannot stop bragging to Angel and Sunny about them in hopes that everybody hooks up with everybody.

If you find yourself stuck in the Friend Zone or she has a boyfriend or she’s a coworker or WHATEVER…it doesn’t mean she doesn’t have hot friends that she could hook you up with.

And I was MORE THAN EAGER to bestow my besties onto these boys that I hold so dear to my heart.

And if her girlfriends see you in the same light, they’ll be sure to treat you just the same.

6. They Have The Final Say ALWAYS

After my show and tell of everybody, Angel proceeds to order us more shots of Patron.

Her and I now cozied up at the bar together, we make murmured small talk about Pizza and Ranch Dressing and our desperate need for both NOW when I realize Sunny isn’t in this after-hours discussion.

I look behind me and see my friend Mitch with his back against a wall and Sunny standing in front of him, her shoulders cocked forward as she looks up at him and twirls her hair while he talks.

OK, granted, I did say that I was more than happy to hook everybody up.

Fine I said it, yes.

HOWEVER, the ratio was off…the 3 of us have a ritual…and we needed to get home before we embarrassed ourselves.

(Not sure if it was too late for that but work with me here).

Not only is Angel not interested in talking to the other boys…but if Sunny and Mitch hooked up…what would that mean for our night?!

What would that mean for our Pizza and Ranch Dressing ritual?!

What would that mean for the entire group?!

Angel and I give each other the knowing nod and dart over to Sunny, me grabbing her arm and YANKING her away from Mitchell and up the stairs while she screams, “Hey stop I love him!!”

“No ya don’t!  You love pizza!” I scream, the 3 of us now heading out of the club and into the street for a cab.

Truth be told, this is how MOST of our nights end.

We usually INSIST that he come home with us…

Because now he IS one of us.

And unless you befriend all her friends to become a part of the pack…they’ll ultimately decide against you and any future occurrence thereafter. 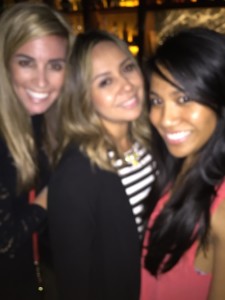 Hello from Angel, Sunny, and me <3

And unless you play your cards right, her friends will either shove the both of you into the Uber for a night of hot romping…

Or send you and your dick packing for all eternity.

So find out how to get them wanting you for her and themselves to avoid being weeded out and casted away with all the other dogs.