I just came home from Gay Night at #Avalon aka #TigerHeat #wtf ?

(Can you tell I’m just learning Twitter with all these fucking #hashtags?)

I went for a friend’s birthday…I’ve never seen so much homo ding-a-ling in my face…and I’ve never been so into it.

As I stand atop the stage alongside the DJ booth (Yaaasssss bitch I’m with the DJ, OK?!), I’m enamored with the site of thonged men dancing like divas to a compilation of Beyonce and Nicki Minaj.

I’m currently dancing by myself, a metal waist-high fence separating the doting fans from the dancers.

I’m on the “Doting Fans” side.

And here he comes… 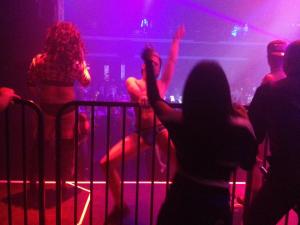 I see his TOIT chiseled blonde-boy butt hop on stage from the crowd, adorning nothing but a bright blue thong and bad boy attitude.

He’s my height…he’s definitely my weight…and he’s got a fierce fire to him that says, “Look at me look at me!”

I’ve never wanted to fuck anything so small and dainty in my life.

He looks like a mix of Zach Efron and James Franco’s little brother…wtf is that kid’s name anyway?

ANYWAY, he’s beautiful, blonde, and bitchy as fuck up there.

He sashays onto the stage as “I’m A Slave For You” blasts from the speakers, his smile and “I’m Hot As SHIT BITCHES!” attitude enamanting with every smiling split he does.

Bouncy splits for that matter!

And I’ve never been so turned on…

If you’ve been following me for awhile..you know how I feel about the “Ungettable” Gets.

The men that turn down every woman that tries…

The guys who stand in the corners on their phone…

The guys that dance with girls only to walk away bored within minutes.

“I know you want it…I can’t try to hide it baby…” blasts from my right as my Blonde Boy Beauty spins on the stage and down into a split, holding my gaze as he bounces up and down, his butt facing a crowd of adorning gay men in tanks and straight girls in awe.

He winks at me.

I must have him.

After a few choice bounces, he comes and clings to the caged fence between us, lengthening his leg across the top, and now pressing his forehead to mine.

“What’s your name, baby?” he teases, his tongue now sticking out and wiggling against my nose.

I run my hand from the length of his ankle to the crease of his inner thigh and hairless scrotum, now tugging at his blue thong until it snaps.

I feel the sweat and coconut oil sticky on my hands.

“I’m JJ…and I want you” is all I can muster (actually SCREAM) into his sweaty ear, his thin blonde hair tickling the top of my lip.

He giggles, his body matching mine in rhythmic humps and bounces as Britney screams from the speakers, “Baby…don’t you wanna…dance up on me…?”

He drops to the floor in a single split.

Upon the return of his forehead to mine, he cautions: “Be careful baby…I may be gay but I definitely do a girl once a year.”

He snaps his arm high into the air and shimmies across the stage away from me, his teeny tiny boyish bouncing body met with screaming girls and desperate hands as he moves.

I reach out to him and let out a defeated whimper, like a little kid in a pet store now watching the puppy she can’t afford being held by another kid.

I’ve never done as short as me.

For him…I’d make an exception.

The last time I fucked a gay guy was about 8 years ago in college after 8 hits of Ecstasy (when Ecstasy was cool…before Molly duh).

I was dry…he was giggling at epicly high pitched sounds and saying, “Hehehe THIS IS FUN!”

I think I’m about due for another.

Now if only I had game for getting gay guys…