I brought my gorgeous, 5’10, green-eyed, half-brown half-white, younger cousin Jessica out in West Hollywood this past weekend…

(Yes, we have the same name…don’t ask)

Here’s My Lil Miss Jessica below: 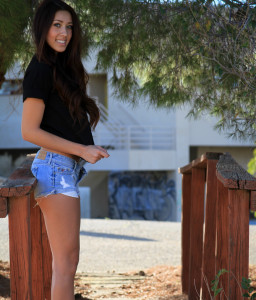 ALSO the area of town where NONE of my girlfriends enjoy going anymore because men ignore us like a pile of old sushi at a buffet.

Now, by the end of the night, Jessica and I are DYING for some male attention, mostly cuz not a single boy has given a flying FUCK about how cute we look in our outfits…and we look cute dammit!

The worst thing a girl can experience is putting on about $56 dollars worth of make-up, spending about 3 hours deciding between 8 different $300 outfits, then getting in her $180 shoes…only to get 0 looks and compliments for the night.

Suffice it to say, we are DESPERATE to talk to ANYONE (contrary to your possible belief, girls are dying for you to make them feel pretty at the bar).

We eventually spot this glasses-wearing, 5’8 buff boy that’s practically bursting from his tight t-shirt when he looks over at us and gives us a wink.

Jessica and I about die: If he’s straight we are DEVOURING him!

Again, we’re jonesing for an ego boost at this point…and if he’s cute, all the better.

It doesn’t matter what you look like, how hot you think you are, or how desperate the girls are…

Because if you don’t know how to carry the first 5 minutes of conversation…she’ll for sure roll her eyes, turn around, and scream, “NEXT!!!!!!”

Which is exactly what Jessica and I end up doing to our Seemingly Sexy buff boy.

And here are the 5 ways you can be SURE to lose her within the first 5 minutes…and how to AVOID becoming just another sad story she shares with her girlfriends (or readers!):

So Seemingly Sexy comes up and directly starts the conversation with Jessica.

Only problem is, he positions himself directly in front of her, thus leaving me OUT of the conversation.

WHAT THE FUCK, BRO?!

Not only is she part of my posse, but I’m ALSO her overly protective older cousin…and I’ll be DAMNED if somebody comes at my lil sweetheart like that!

Also, the Undeniable Diva in me can’t help but feel shafted and further ENRAGED by this maneuver…

Now, her friends are her very first line of defense…

And if you make a beeline directly to HER, her forces will line up to fight you OUT.

Girls always know who their hottest friend is…and they’re USED TO having to fend off a bunch of dogs coming in for meat and treats.

They will know and take appropriate action to chop off your penis.

DON’T PISS OFF THE OTHER GIRLS!

Then they will gladly guide you into the group and into their hot friend’s vagina thereafter.

2. Asking Her Questions That Come Out of Your Ass

So I’m pretty forgiving of this guy coming directly to talk to her because, mark my words, I am no cock-block…

So FINE DUDE…ignore me and talk to my cousin.

I am well into my third Vodka Cranberry and having too much fun to care ANYWAY.

Of course I’m not gonna COMPLETELY peace on Jess…

I HAVE TO STAND GUARD IN CASE HE TRIES TO RAPE HER!

And that’s when he launches full attack with a pocket full of questions pulled most certainly from his asshole:

– What kind of stuff do you do for fun?

– What other places do you like to go to?

– Are you having fun tonight?

– Where’d you get your outfit?

I shake my head and roll my eyes as Jessica’s answers start getting shorter and shorter…and SHORTER.

Write this down and/or commit this to memory:

Anything you pull out of your ass will MOST DEFINITELY BE SHITTY!

Shit that has NOTHING to do with the moment or her or YOU.

If you have an arsenal of things that you think you can say to keep the conversation going, you couldn’t be any more wrong.

“So if not from my asshole, Jessica, where should I pull stuff to keep the conversation going?”

Because the truth is, everything she gives you IN the conversation is gonna be your ammo to fire more shots.

But you can’t POSSIBLY know what to say next until you LISTEN to the shit she’s already giving you (as opposed to the shit from your ass).

Because anything rehearsed will come off as JUST that…and the second you retreat into your head to utilize all your stored up lines and questions is the second WE’LL retreat from the conversation.

Do NOT give us a reason to turn away from you and the conversation!

3. Keeping Yourself From The Conversation

At this point I SCREAM in my head, “OMG dude get OVER her!”

When you over-focus the conversation on JUST her, you put the pressure on her and keep her from getting comfortable around you…

Because NOT talking about yourself is the fastest way to get her thinking that you’re a SERIAL KILLER who doesn’t want anyone to know anything about him!

She’s gonna feel a rapey vibe from you and be further weirded out to shut down.

I’m not even IN the conversation and I feel weirded out just from what he’s saying!

Talking about yourself gives her something to relate to, gives her a chance to see that you’re just a regular, non-serial killing citizen of the world, and gets her INTERESTED in knowing you more.

It’s the only thing that’ll separate you from any other guy coming in to try.

At this point, Jessica is fidgeting and downshifting into one-word responses and nods.

But that doesn’t stop Seemingly Sexy from plowing on through.

Bless his heart and perseverance.

I’ve ceased to stop listening but can only ascertain one thing from their interaction: she doesn’t care to be in it anymore.

Getting rapport means getting her COMFORTABLE enough to be in that conversation with you…and interested enough to STAY in it.

Chances are you won’t get rapport.

And if you don’t get rapport…

You won’t get HER past 5 minutes.

5. Whipping Your Dick Out (No, Not Literally…Actually Yes Literally As Well)

I all about have stopped listening to this conversation until Seemingly Sexy turns his attention towards me and says to my cousin, “OH you have a boyfriend?  I guess I’ll just talk to HER then”

That’s when Jessica and I scream, “FUCK YOU!  GET THE FUCK OUTA HERE THEN YOU FUCKING CREEPY ASSHOLE!” and shove him far back into the pack of hungry hungry homos.

Here’s the thing: The worst thing you could possibly do in the first 5 minutes BEFORE getting rapport is to let us know you want us.

Because you don’t even know us!

And if you haven’t gotten a single iota of personal information from us…and have yet to shed a single light on who YOU are…you may as well whip out your dick and slap us in the face with it because HE’S clearly the reason you’re here!

Nothing is more offensive to girls then you having an OBVIOUS agenda of getting into our pants.

Granted, we know why you’re talking to us…and we really don’t care.

But to make it known that you only want one thing by asking if we have a boyfriend, by getting flirty before getting to know anything about us, or letting us know that you’re interested in us…

THIS is what makes you come off as “too forward” or “creepy”…because THESE types of guys truly do not give a FUUUUUUCK about who we are and will gladly stick their dick in anything that responds to them.

Now I’ll NEVER say don’t show us you want us…because this is an absolute MUST if you’re gonna get us or get yourself OUT of becoming our friend.

But within the first 5 minutes, keep your dick in your pants and first find out if we’re someone you’d even wanna be inside!

I’ve had plenty of clients take this simple switch into their approaches, only to find that MOST of the girls they talked to they actually couldn’t stand within the first 5 minutes.

Now, Seemingly Sexy didn’t end up so lucky…but that doesn’t mean you can’t learn from his mistakes!

For as good looking as he was and for as DESPERATE as Jessica and I were, his faux pas were no match for our weeding out process.

In fact, we always wanna give you the benefit of the doubt…especially if you’re ballsy enough and nice enough to come and say something sweet.

Sure you may be a serial killer before proven otherwise…but that doesn’t mean we won’t at LEAST give you a chance!

For as cold and closed off as girls may seem (especially at the bar), we’re WAITING for a guy like you to prove us wrong about men.

We wanna know you, we wanna laugh our asses off with you, and we WANT YOU to want us!

But specifically in that order.

So make sure you do what it takes to get a girl’s defenses down and have her wanting you to stick around for MUCH LONGER than just 5 minutes.

Me and Jessica will be very grateful when you do 😉